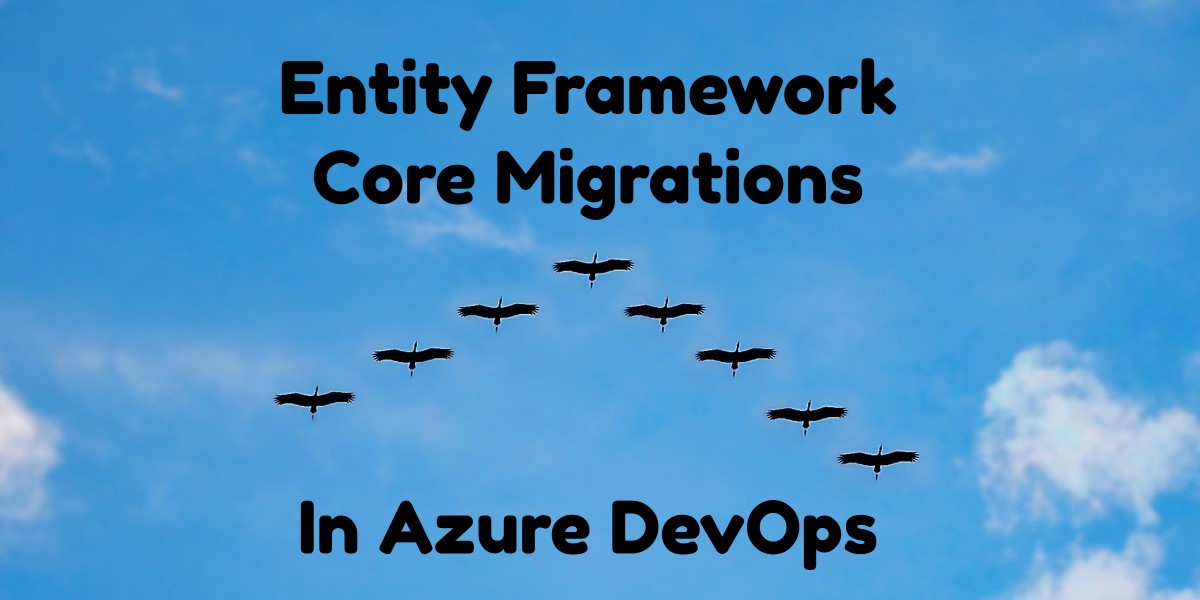 When you are ready to apply those migrations to your database, there’s another command:

Your database gets brought up to the latest version–whether that means applying just the most recent migration or two or creating the entire schema.

Given that Microsoft is responsible for creating this support, you might think that the Azure DevOps build and release pipelines would have great support for EF migrations and it would be simple to drop migrations right in. However, the ‘dotnet ef’ command builds the source so it can apply the database updates. This would be fine if we want to apply the database migrations in the build pipeline. But we don’t want to do that–database update is a deployment activity and belongs in our release pipeline.

I went through several different approaches to handling this until I settled on what I think is the cleanest: have your build process generate the migration scripts, package them as artifacts, and run them at deployment time.

My build is run under psake and here is the relevant line:

$stagingDir is my artifact staging location.
$scriptName is the name of SQL script we will run during deployment.
$dbContext is the class name of the DbContext (without namespacing).

Note the –idempotent flag. This directs the migration code to generate a script that can be run on an existing database and only apply any missing migrations.

Then, over in my release pipeline add step to run a SQL scripts. My database is Azure SQL:

Set this task up to find the SQL script we created in the build and run it against the corresponding database.

While it’s not as automatic as we might have liked, running EF Core migrations in Azure DevOps is still pretty easy. This approach would work just as well with any combination of build and release tools such as Team City, Octopus Deploy, etc.

How to Massage .Net Apps to Work in Azure Container App,

If you’re running a .net / Azure / Azure DevOps shop and you haven’t had the request to move your apps into a container, it’s coming!

How to Fully Automate Software Deployments,

Though it can be one of the most feared actions a software company makes, don’t be afraid to automate software deployments.

Learn about the PowerShell tab-completion feature and how Register-ArgumentCompleter gives you more control over app development and management.